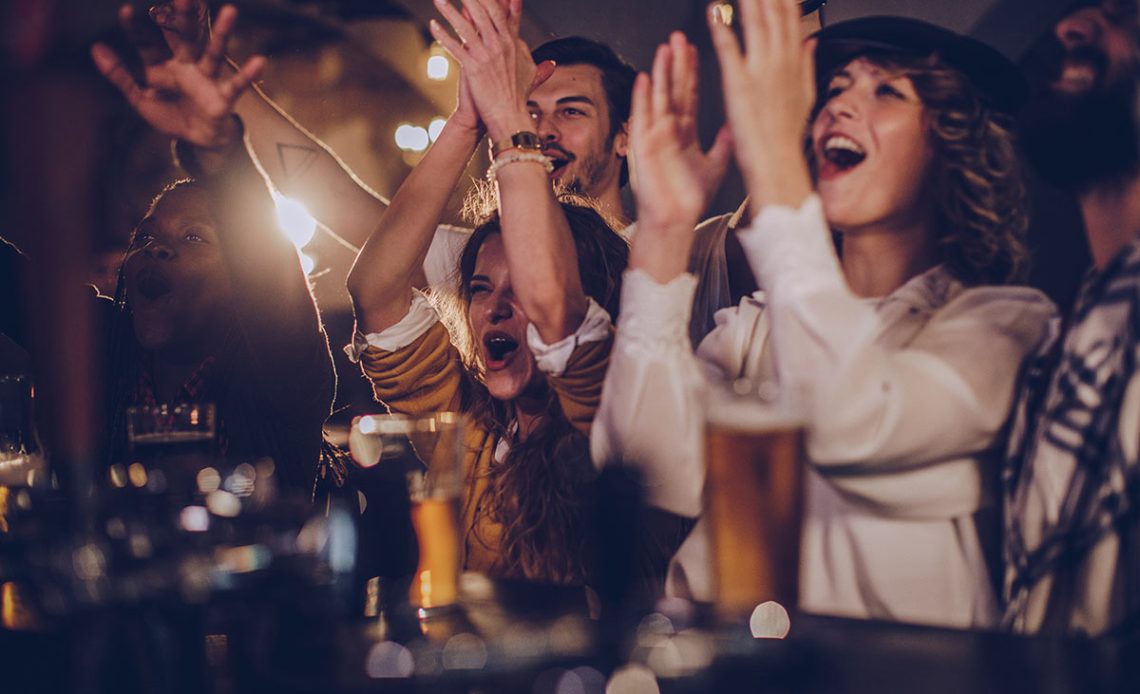 There are some great sports bars in Puerto Vallarta. You can find places to watch soccer games as well as American football, baseball, basketball, hockey, boxing, golf, and even poker, curling, and more. So, if you’re looking for a place to watch the game, the championship, or even the Super Bowl, head to one of these spots.

Players Sports Bar is located in the Romantic Zone near Los Muertos Pier on 138 Rodolfo Gómez street, between Amapas street and Olas Altas street, next to Barra Light. They specialize in burgers, with the half-pound Players Burger being their most popular. They also serve chicken wings, fish tacos, fish ceviche, and other typical sports bar fare, as well as Mexican and American beer. You can watch your favorite games on their six television screens. They have TV service from the U.S., Canada, and Mexico. They show soccer, NFL football, basketball, baseball and hockey games, including games with French language commentary.

All Access Sports Bar is located in the Romantic Zone next to Lazaro Cardenas Park, at Lazaro Cardenas 175 and is one of the more well-known sports bars in Puerto Vallarta. They serve Mexican and American foods for breakfast, brunch, lunch and dinner. They offer dine-in and takeout. They have an outdoor patio. The menu includes eggs benedict, breakfast burritos, pancakes, biscuits and gravy, country fried chicken, wings, burgers, fried jalapeños, nachos, green chili, salads and finger foods. In addition to beers, wines, and spirits, they also serve handmade cocktails such as the “Mezcalita” which includes mezcal, Triple Sec, and lime juice, and the “Creamsicle” which has Captain Morgan spiced rum and Fanta orange soda. When it’s not game time, they have live music. On Tuesdays, Chef Eddy offers a pop-up menu, featuring different savory dishes each week. Drink specials days like Wine Cooler Wednesdays and group hiking trips round out All Access Sports Bar’s offerings.

Nacho Daddy is a sports bar, Tex-Mex style restaurant, and concert venue also in the Romantic Zone located at 287 Basilio Badillo. They show all your favorite major league sports games including NFL, NHL, NBA, MLB, FIFA, curling, and more on their eight large TV screens, which are all connected to cable and streaming sites. Of all the sports bars in Puerto Vallarta, Nacho Daddy may have the most to offer in regards to activities and nighttime fun. They have trivia, bingo, poker, karaoke, and live music, depending on the night. The Texas Embassy Blues Band plays every Friday night, and they are definitely worth checking out. You will be impressed by lead singer Sean Moore’s blues vocals, backed up by a solid band.

Again in the Romantic Zone, you will find Los Muertos Brewing, Vallarta’s first craft brewery and brew pub, at Lázaro Cárdenas 302. They opened on the Day of the Dead (Día de Muertos) in the year 2012 and served their very first pint of Agave Maria Amber Ale one month later. Now they brew 14 different kinds of beer, including ales, IPAs, stouts, and seasonal beers. They show sports games on the TVs inside the restaurant. It’s a fun place to watch the game, eat some woodfired pizza or burgers, and order a flight of beer to try the different kinds they make.

Closer to the Hotel Zone on Av. Francisco Medina Ascencio 1989 in Las Glorias, you will find Americana Sports Bar, one of the newest sports bars in Puerto Vallarta that recently opened in December 2021. They describe themselves as “An Authentic American Sports Bar” featuring a full-service bar and serving traditional bar food. They play music and they have seven jumbo TVs where they play American professional football, baseball, basketball, and hockey games, as well as college football and boxing. They also play Canadian sports, and they have great drink specials. They are located on the second floor of the Villa Vallarta Plaza. You can follow them on Facebook for upcoming events and specials.

El Torito was established in 1982, making it one of the most well-known sports bars in Puerto Vallarta. In fact, they claim to be the #1 sports bar and barbecue house in town. They recently relocated to the boardwalk in Marina Vallarta and can be found at Quilla #112 marina del Rey. They show soccer, American football, boxing and all of your favorite sports. You can make a reservation ahead of time by calling, which is a good idea because they get pretty full on big game nights and fight nights.

Chappy’s is also located in Marina Vallarta at Mástil 14. They are open for breakfast, lunch, and dinner. They have eight TV screens and play all kinds of sporting games, including football, soccer, baseball, basketball, boxing, golf, poker, and even curling! You can enjoy a good view of the boats in the marina while watching your favorite games. They serve pizza, jalapeño poppers, chicken, linguine in cream sauce, burgers, ribs, chicken tenders, French fries, guacamole, burritos, snacks, and more. They have been in the Marina for at least 10 years.