What Happens on the Day of the Dead? 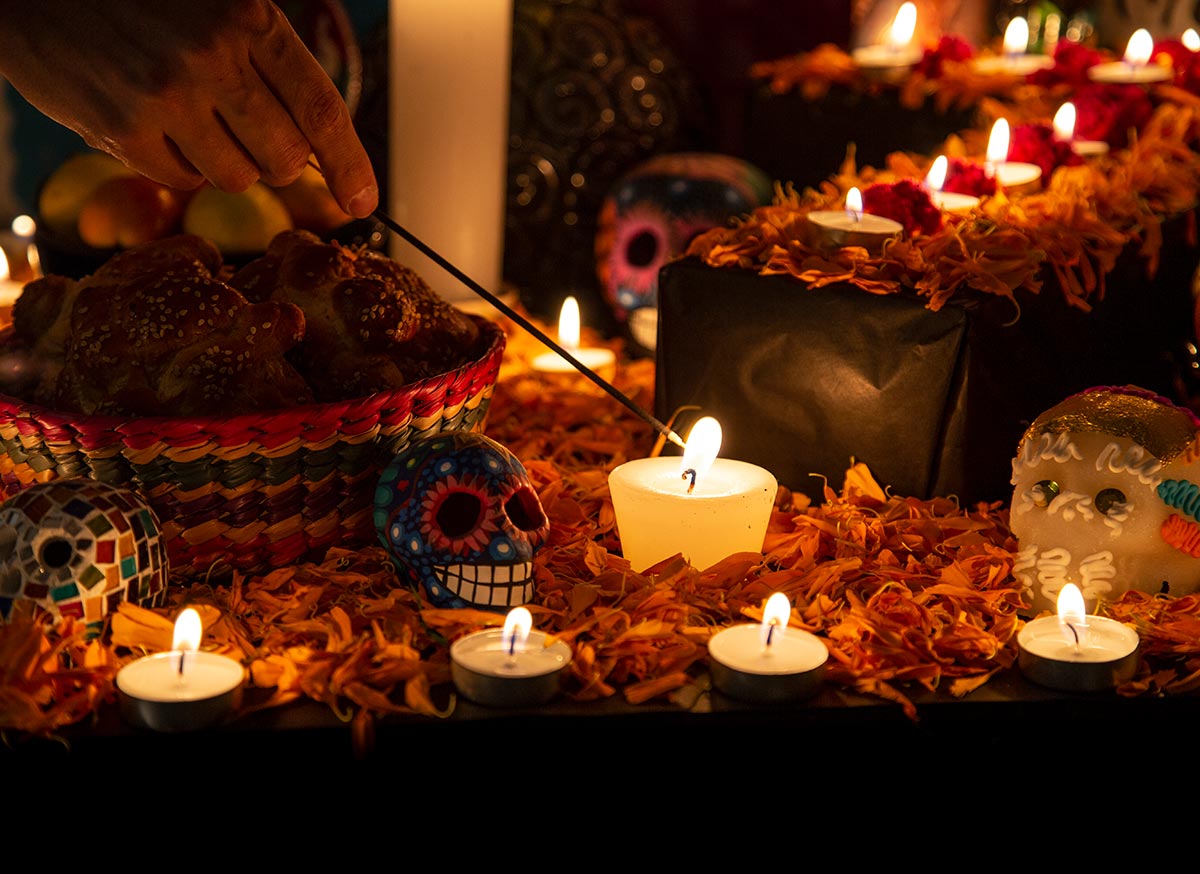 In Mexico, Día de los Muertos “Day of the Dead” is an annual holiday that happens right after Halloween, on November 2 each year, to honor the dead.

In pre-Hispanic times, when someone died, the individual was wrapped in a petate and buried. The name petate comes from the Nahuatl word petlatl, which means “woven mat”. The petate is woven from the fibers of the Palm of petate. After the burial, the relatives organized a night of celebration in order to guide the deceased on their journey to Mictlán, a Nahuatl word, which means eternal resting place of the dead.

UNESCO declared Day of the Dead an Intangible Cultural Heritage of Humanity in 2008, due to its cultural importance and significance, affirming the role of the individual within society and reinforcing indigenous belief systems.

What Is the Day of The Dead?

The Day of the Dead is a celebration to honor the lives of family members and friends who are no longer with us and the one day of the whole year where it is thought that their spirits can cross over to the land of the living to reunite with loved ones. It is a day that welcomes the transitory return of the souls of the dead.

It is not a sad occasion. On the contrary, it is a holiday that celebrates the deceased and is a day for them to be remembered, with joy rather than sadness.

On this day, family members gather at the graves of the deceased and create an altar at the site of the tombstones with offerings for the dead. The items offered feature pan de muerto “the bread of the dead”, sugar skulls to feed the souls of the dead, and are decorated with bright yellow marigold flowers, photos of the deceased, and favorite foods and drinks to honor their relatives who have passed away.

Legends say that once a year, our deceased return to celebrate with us. It’s believed that the offerings will encourage visits from the souls of the deceased to hear the prayers said for them, smell the food, and join in the celebration.

The Day of the Dead is a rare holiday to celebrate life and death. It is not a mourning party, but a celebration.

When Is the Day of the Dead?

The Day of the Dead in Mexico lasts for two days, on November 1 and 2. In the United States, Mexican families usually celebrate the holiday on November 2.

On November 1, we celebrate “Día de los innnocentes” or the Day of the Innocents, which honors infants and children who have died.

Midnight on November 1st marks the beginning of the holiday and begins with the Day of the Innocents. Folklore says that the spirits of all deceased children return to be reunited with their family and friends for 24 hours.

To inspire the children to visit, the families make an altar known as an “ofrenda” and decorate it with marigold flowers, pictures, a sugar skull with the child’s name, and their favorite food and toys.

The decorations and celebrations are changed to a more adult theme at midnight the next day, with alcohol and atole, to honor the faithful departed.

Families play music, dance, and sing together while remembering their loved ones and sharing stories about them.

What Happens on the Day of the Dead?

People and tourists gather in their local cities or travel to major cities like Mexico City, where the town wears colors and creates beautiful offerings. There is even an incredible parade named Festival de Calaveras or “Festival of Skulls” held in Mexico City’s Zócalo (central plaza), which was inspired by the opening scene of the James Bond film Spectre.

Children and adults who want to paint their faces with decorated skulls to parade through the streets. Visits to the cemetery are very typical of the last day, since the families will decorate the graves with marigold flowers, gifts, and sugar skulls with the deceased’s name. As is customary, the next day, they clean the tombstone.

There Are Two Important Things You Should Know…

First, the Day of the Dead is celebrated in Mexico, but it is a festival celebrated worldwide!

There is a celebration called All Saints Day that many religious communities celebrate at the same time as the Day of the Dead.

Everyone has a celebration to honor their deceased loved ones.

But the Day of the Dead is unique in its traditions!

The beautiful ritual of creating altars with candles lit to guide the spirits home; the scent of the marigolds, considered a symbol of life and death, is believed to guide the dead to the feast that awaits them; the use of sugar skulls to remind them that life was sweet; and the artisan costumes influenced by La Catrina, all contribute to the celebration of the memory of the person who died, which favors remembering over forgetting.

And we cannot forget the meaning of understanding life and death. We will never know what could happen tomorrow, in a day, or in an hour…

…We must always be present in what we do with our family and friends and enjoy this short, but incredible trip.

And second, the Day of the Dead is not “Mexican Halloween”…

The United States has Halloween that began as a Celtic festival where people lit bonfires and dressed up to protect themselves and scare off ghosts.

On October 31st, it has become a tradition in which children dress up and go trick-or-treating. Families decorate their homes with cobwebs, bats, and other themed decorations.

Sometimes it gets confusing due to the time of year, but the beliefs about life after death are very different.

Now you know what this beautiful celebration is about.