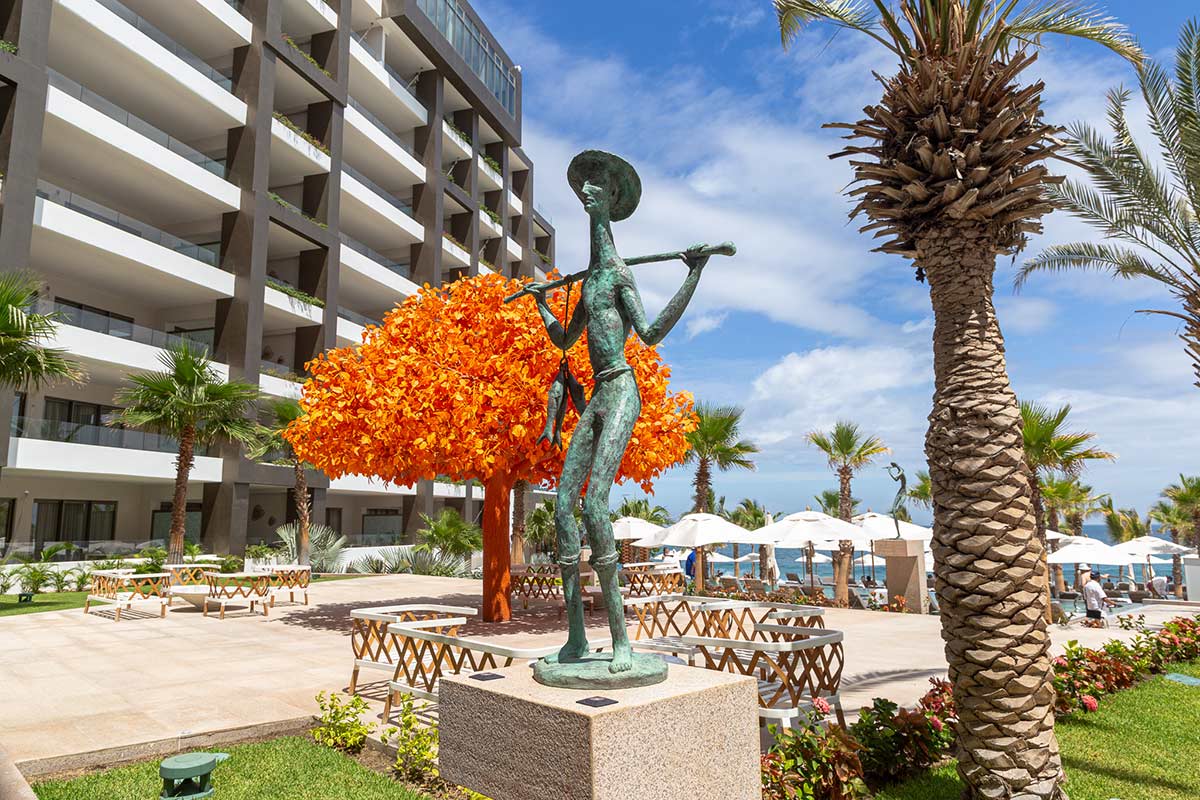 The art at Garza Blanca Resort & Spa Los Cabos comes from many different artists and origins, but it all holds deep meaning related to the resort. From inspiring wall décor to breathtaking sculptures, there is a lot to see during your stay!

Experience a walk through the hallway gallery, sit in the modern and unique peacock chairs in the lobby, or learn about the history of Los Cabos prompted by the replica of an historical fishing boat that welcomes you into the resort.

High ceilings and white walls with floor-to-ceiling windows welcome you as you enter the five-star resort. While strolling down the hallways of Garza Blanca Los Cabos, it will feel as though you are walking through a modern art gallery with many beautiful works hung for you to enjoy.

The art in the hallways concept came about as an opportunity to showcase beautiful images in the corridors, adding to the journey that takes you to your room. There are pieces full of bright, animated colors and figures, but also pictures with more muted tones.

The wall art hung in these hallways will draw you in and make you want to stop and take a closer look. They conjure different feelings and emotions for each guest that experiences them, but no matter what, they will leave you feeling inspired.

This piece of art at Garza Blanca is filled with warm tones and bold shapes, reminiscent of a party or summer festival full of life and dancing. The cool-toned figure looks as if it is holding a mask up, perhaps hinting at some kind of celebration going on in the scene.

This next work has the effect of a watercolor painting. It connotes feelings of a rainy autumn day, with the earthy scent of freshly fallen leaves and a damp chill to the air. It will also make you very glad to be appreciating this picture from the sunny paradise of Los Cabos!

These next two frames go so wonderfully together, with the blue and sand colors marbled together to make a wave effect in one, and a more modern, abstract feeling captured in the other. The picture on the right holds hints of a musical instrument such as a violin or cello—or perhaps a decomposition of one. The oceanic flair to the frame on the left is calming and will make you crave a trip down to the beach.

Lastly, these two pictures connote a great sense of freedom and positive energy. These pieces could fit right into a laid-back coffee shop or a trendy jazz club. A feeling of ease will wash over you as you stroll by this pair…and maybe a strong desire to go order an iced coffee from the resort Market & Deli.

The painting, “Serpiente Emplumada” (Feathered Serpent) by artist and activist Abdallahy Antonio Velazquez hung in the lobby of the hotel at reception, is a series of canvases filled with swirls of tans and browns and bursts of turquoise and red. It is an abstract, 3D piece.

The series of 3 paintings, which are larger than life and full of animated color, invite guests to feel welcome while checking-in to the resort and to interpret the pieces in their own way, projecting their own emotions and sensations onto it. At the end, the intention is to make the guests feel a warm invitation to enjoy their stay with us and to feel the cheerful vibe of these artistic works.

Earlier in his life, Velazquez was involved in activist work documenting violence against the Sahrawi people. Later, this documentary was presented to the United Nations Security Council and was presented the gift of Sahrawi Arab Democratic Republic nationality. In 2011, Spain also recognized him for all his work in defense of human rights that he has done for Western Sahara.

After his extensive travelling and activism, Velazquez decided to return to Mexico in 2012. He adopted the name “Abdallahy” to honor his Sahrawi friend. Much of his art reflects his passion for activism and has even named one of his projects, “ARTivism, art this is lived.”

More information about the artist can be found here, along with some of his stunning 4D creations!

Sculptures by the Poolside

Jose Ramiz Barquet sculpted “Nostalgia,” which is part of the art walk guests can enjoy at the Malecon in Puerto Vallarta. Statues at Garza Blanca Los Cabos were inspired by Barquet’s work of art. These statues sit outside the resort among the pools and palm trees and add to the relaxed vibe with their stretchy, fun style.

“Nostalgia” features two figures sitting on a bench together, both looking out to the ocean and mountains. Barquet created this statue to represent his unending love for his wife, Nelly. The sculpture has been on the Malecon since 1984 and was one of the first ones placed there.

Sculptures at Garza Blanca include a fisherman, guitarist, flutist, cellist, violinist, and a praising figure. Check them out at the resort and take some pictures with the gentle giants!

Historical Fishing Boat in the Lobby

The fishing boat in the lobby of Garza Blanca Los Cabos represents the humble start Los Cabos had as a fishing village years ago. In 1977 everything changed with the construction of a nearby airport that would open Los Cabos up to international flights and travelers. This is what slowly transformed Los Cabos into such a popular vacation destination.

In the 1960s, when Cabo was still primarily known for its fishing splendors, many actors such as Charlie Chaplin and John Wayne would visit the small town as a getaway. To meet the increasing demand, Mexican President Abelardo Rodriguez Montijo built the first hotel in Cabo; Hotel Hacienda. This presence of the Hollywood actors is also a factor that helped draw tourists to the sleepy town.

The completion of the Transpeninsular Highway 1 in 1973 would also increase tourism by connecting the USA/Mexico border with the tip of the Baja Peninsula in Los Cabos. Today it remains one of the most popular vacation spots for people from all over the world!

As soon as you enter the stunning lobby of Garza Blanca resort, your eyes will immediately be drawn to the gorgeous peacock chairs that sit in the center close to the sliding glass doors that lead to a terrace overlooking the absolutely stunning resort grounds and outdoor swimming pools.

The uniqueness of this hotel lies in the fact that the street level is elevated from the beach, for this reason the opportunity arose to put the lobby on the fifth floor rather than at ground level, which gives guests the added advantage of having a spectacular bird’s-eye view of the entire resort grounds from the lobby’s terrace as well as allowing first-time visitors a sneak peak of the knockout ocean views.

The peacock chairs were created by Kenneth Cobonpue, a furniture designer and manufacturer from the Philippines who has won multiple awards for his work. He began his design studies at the Pratt Institute in New York and completed his apprenticeship in Florence, Italy. His studies in design have led him to create modern pieces featuring natural materials (such as peacock feathers). His brand, KENNETHCOBONPUE® has become a globally recognized brand, with celebrities and members of royalty being among his clientele.

The art at Garza Blanca is something to behold and is a spectacle that draws guests to the resort to see the unique works. The art adds a modern feel overall to the hotel and really emphasizes the luxuriousness of it. Dance around the poolside with the statues, or glide through the art gallery halls to get a taste of the art at Garza Blanca Los Cabos.