Day of the Dead: Tradition You Need to Know 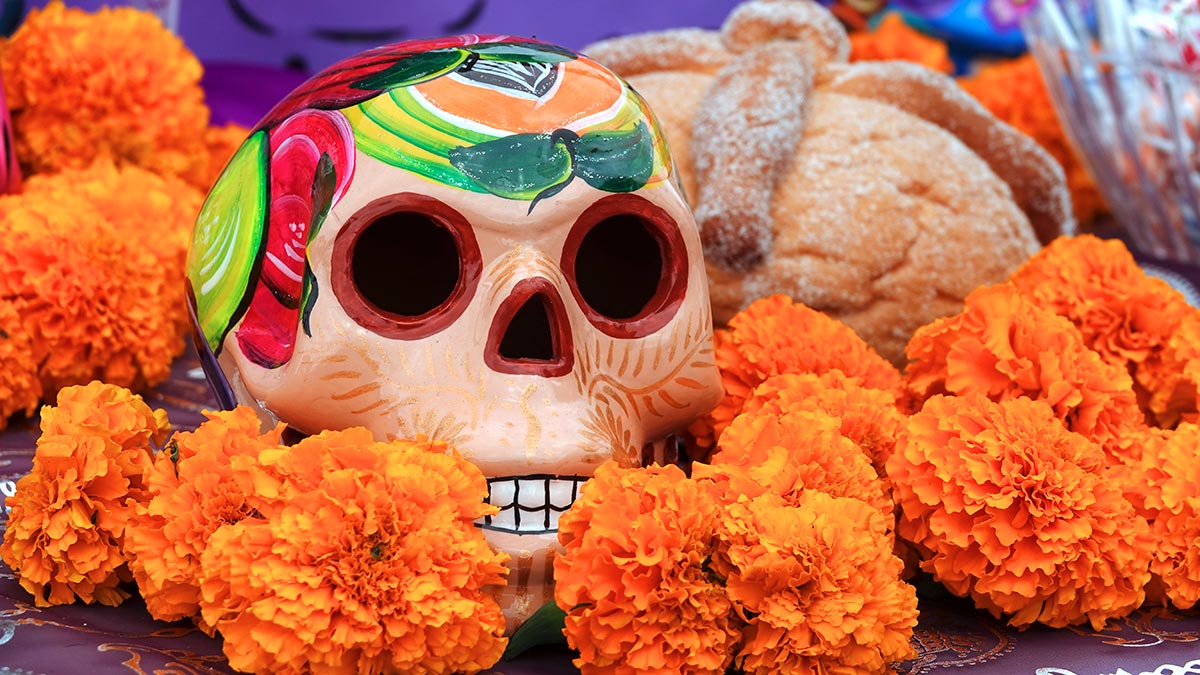 Day of the Dead or Día de Muertos is a Mexican holiday that honors deceased family members, friends, and ancestors.

The holiday spans several days between October 31st and November 4th each year, depending on who you ask, but most people agree that November 2nd is the official Day of the Dead.

During those days, family and friends typically get together to remember loved ones who have died, often praying for them, and sharing stories.

In Mexico, death is understood to be a natural part of life, so Día de Muertos is not a time of sadness, but rather a celebration of the departed, wishing them well on their journey, and feeling happy remembering them.

The holiday is sometimes called Día de los Muertos, but this is a misnomer. The correct name is Día de Muertos.

Mexican traditions that are observed during Día de Muertos include building altars, dressing as catrins and catrinas, and painting one’s face.

Building an altar starts with a table or some boxes or crates. The altar is usually two or more levels. Boxes are stacked on the floor or on top of the table. Each level is covered with fabric. Traditional colors include orange, purple, white and black. Sometimes other colors or even Mexican blankets are used.

Strings of paper flags are added. These flags are called papel picado (meaning perforated paper), and they represent the union between life and death.

Photos of loved ones who have passed are added. Personal items that belonged to the departed, such as jewelry, personal effects, or things the person enjoyed are also added.

Food and drinks are added to the altar, representing the favorite food of the deceased. Pan de muerto is a type of Mexican bread made for Día de Muertos and placed on altars. It represents an earthly gift and the generosity of the host. Salt is often placed in a small bowl on the altar, representing purification and preservation of the soul. Glasses or bottles of tequila, wine or beer may be added to celebrate and “enliven” the souls, especially if the deceased enjoyed those beverages during life. A glass of water is added to quench the thirst of the deceased, and strengthen them for their return. Seasonal fruit, rice, tamales, mole, and hot chocolate are also common offerings. It is believed that the spirits consume the scents and the essence of the food.

Sugar skulls or chocolate skulls, known as calaveras, are added to represent the deceased.

Candles are added to shine a loving light and guide the souls of the deceased to the altar. Día de Muertos is considered to be the time when the veil between the world of the living and the world of the dead is thin, and the souls of the dead visit the altar, so the candles help them find it. Sometimes the candles are arranged in the form of a cross, indicating the North, South, East and West, to help the souls find their way.

Copal incense is added to clear away any negative energy or bad spirits.

Altars can be made inside family homes, or even outside. Many cities in Mexico have altars downtown in the main square for the public to visit.

During Día de Muertos, it’s traditional to visit the graves of the deceased. Family members clean up the gravesites of their loved ones, add flowers or other offerings, and pay their respects. However, this year, cemeteries across Mexico will be closed between October 30th and November 3rd in accordance with safety measures. This includes cemeteries in both Cabo San Lucas and Los Cabos.

This tradition has its origins in the 1900’s when Mexican printmaker, cartoon illustrator and lithographer José Guadalupe Posada created his now famous etching entitled La Calavera Catrina or Catrina Ljazmun a Calavera Garbancera (‘Dapper Skeleton’ or ‘Elegant Skull’) between 1910 and 1913.

At the time, Posada felt that Mexicans were aspiring to be more like European aristocrats, and he didn’t think that was a good thing. The satirical artwork depicts a female skeleton with a fancy European style hat. The writing that accompanied the etching describes a person who was ashamed of her indigenous origins and dressed imitating the French style while wearing makeup to make her skin look whiter.

Although she started as political commentary, La Catrina was an undeniably catchy character. In the 1940s, Mexican painter Diego Rivera painted her into one of his murals, and she began to gain even more popularity. At some point, people started dressing like her and painting their faces on Día de Muertos. Now she has become the most famous icon of Día de Muertos in Mexico, and she has a male counterpart, of course, so the men can also dress up and partake in the tradition.

Día de Muertos traditions can be traced back to indigenous Aztec rituals dedicated to Mictecacihuatl, The Goddess of Death, which traditionally took place in the summer, but were moved to the fall during the Spanish colonization of Mexico to coincide with the Catholic All Saints Day.

The Aztecs had a goddess called Mictecacihuatl, also known as Lady of the Dead. She was the keeper of the bones in the underworld, and she presided over the month-long Aztec festival honoring the dead. The Aztecs used skulls in their rituals and as a part of their culture.

With Spanish colonization, Christian beliefs mixed with Aztec rituals, the result of which mixed with modern history has evolved into Day of the Dead as we know it today.

Day of the Dead in Los Cabos

Typically, most cities in Mexico have Día de Muertos celebrations in the city center, including large altars and large catrina sculptures that draw crowds of locals and tourists alike.

If you are visiting the Los Cabos area, from October 31st to November 2nd, there will be a Day of the Dead festival, Secrets of La Catrina, downtown in San Jose del Cabo, where visitors can see this tradition with day of the dead elements, such as flowers and bread of the dead (pan de muerto) and participate in workshops. For more information, see the Visit Los Cabos website.

If you are planning to travel to Mexico during Día de Muertos this year, and prefer to skip the festivities and continue to social distance, Garza Blanca Resort & Spa Los Cabos has all the amenities you could possibly wish for, so you can just relax, enjoy exquisite pampering, and plenty of sunshine.

Garza Blanca Los Cabos continues to take safety measures very seriously. The safety of our guests is our utmost concern.