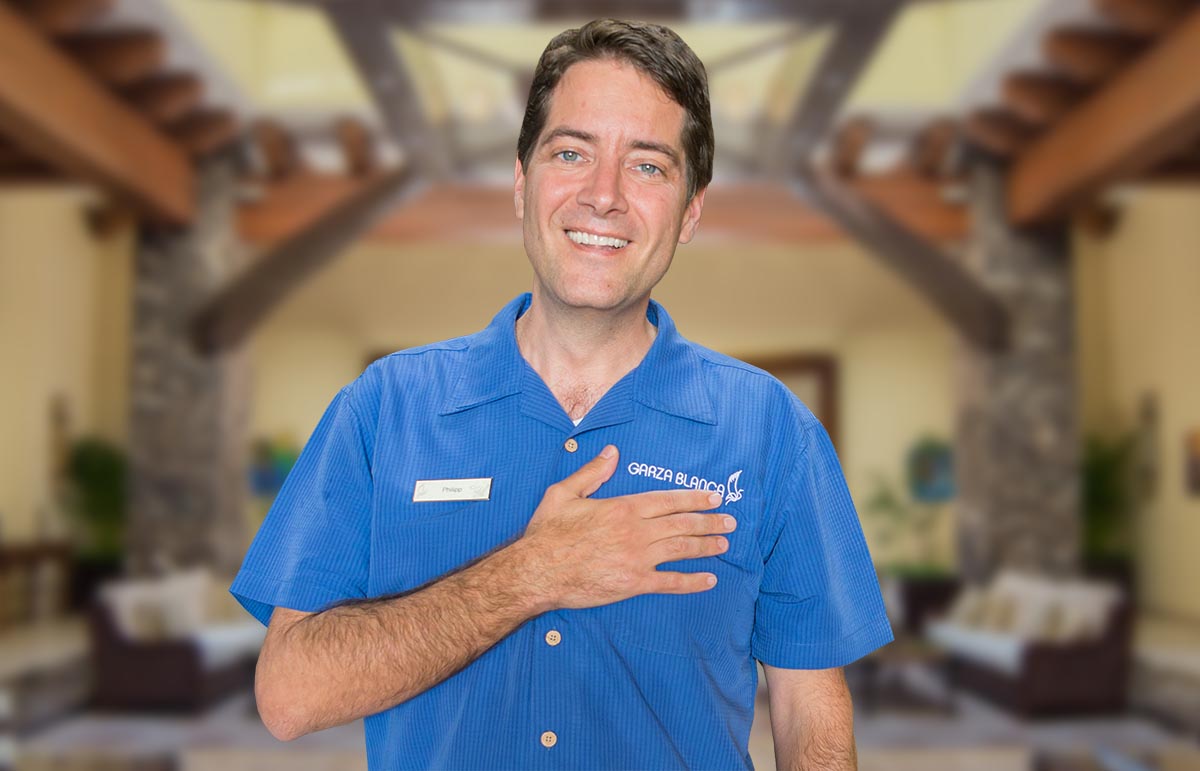 Meet Philipp Real, Garza Blanca Resort & Spa’s brand new General Manager who joined the team at your home away from home in December 2017. The youngest of four siblings, father of one daughter and a doting husband, Philipp is a man whose smile and positivity is both contagious and inspiring. Read what he had to share about both his professional and personal life.

When did your passion for hospitality begin?

I grew up in a hotel. Quite literally! My parents built a small hotel in the Principality of Liechtenstein. It began like a small bed and breakfast and they built it up over time to become a luxury boutique hotel. We lived at the hotel; the lobby was my front door. Every day after school or on the weekends, I would help carry luggage, wash dishes, serve tables and so on.

When I left school, you could say I rebelled against the hotel business. At first I studied finance at Commercial and Financial College, but, after a while, I realized that I couldn’t escape my heritage, and I went to study a Bachelors in International Hotel Management in Lucerne, Switzerland, where I had some amazing overseas internships in Italy, Portugal, St. Barths and even New Zealand.

How did you arrive to be the General Manager at Garza Blanca Resort & Spa?

My first job was on Curacao, a Dutch Caribbean island located north of Venezuela, where I met my wife. We fell in love and from there I moved with her to Miami, USA as Assistant Director of Food & Beverage. When my temporary visa was close to expiring, I got a job at the Four Seasons in Punta Mita, which is when you could say my love for Banderas Bay and Puerto Vallarta began. I married my wife in Punta Mita, and so the area holds a special place for us.

I was promoted within the Four Seasons group and we moved to Chicago, USA followed by Florida until my wife became pregnant and we moved back to Curacao to be close to her family. Back on the island, I got my first job as General Manager of a small luxury hotel before we moved to the neighboring island of Aruba where I set up a hotel consultancy company and my wife opened a successful restaurant in our home. Sadly, due to disputes over licensing etc, we had to close the restaurant but I immediately got a job offer to open a luxury hotel in Panama as General Manager. From there we went to Mendoza, Argentina before heading back to Mexico to run the Capella Resort in Ixtapa, Mexico. That’s when I heard about this fabulous opportunity.

What are you looking forward to most about Puerto Vallarta?

We have travelled so much as a family, we feel it is time to make some roots, to make good friends, to spend some time in one place so my daughter, who is now 8, can enjoy some stability and a sense of community. We hope we can call Puerto Vallarta home. We love the friendliness of the people, their warmth, their eagerness to serve. I think Mexican people are amongst the most gifted people in the world for providing service and making people feel welcome.

What languages do you speak at home with your family?

I speak German (which is my mother tongue), English, Spanish and some French, but at home we generally speak Spanish and English, though predominantly Spanish. I should probably teach my daughter German.

Do you miss Liechtenstein?

I have to say it is a little bit boring. Don’t get me wrong, it is an absolutely amazing place. It is located between Switzerland and Austria in the middle of the Alps with just over 30,000 inhabitants. It enjoys all the positive aspects of Switzerland. It really is beautiful. But, I always wanted to be out in the “real” world. For me as a Liechtensteiner, the Latin world is very exciting, albeit a little disorganized and crazy.

What can members expect in the coming year?

I have only been here for a few weeks, but I can say that I am fully dedicated to ensuring we will be performing at 5-Star levels in all areas, especially service. I hope members will be able to notice the positive changes that occur over the next few months.

Perhaps one of the first obvious changes will be the Members Cocktail Party that we are now going to host in one of the penthouses so we can enjoy a more intimate gathering between the members and key staff. I look forward to meeting members then.

What do you like doing in your free time?

I don’t have much time for sports; what I try to do is follow short routines that keep me active and healthy. For example, I get up at 6am and go swimming for about 20 minutes or go jogging for a short while. I love eating. I love wine. I am a foodie. I love restaurants. However, I also want to spend as much time as possible with my daughter and my wife.

I strongly believe that we as human beings can positively influence people and circumstances by the energy we emit. One of my biggest achievements is to keep my energy levels high, to be excited about things in order to motivate others to achieve tasks. I try to see the positive in things where others may only see the negative. So, I would like to be remembered for being a positive person, an uplifter.