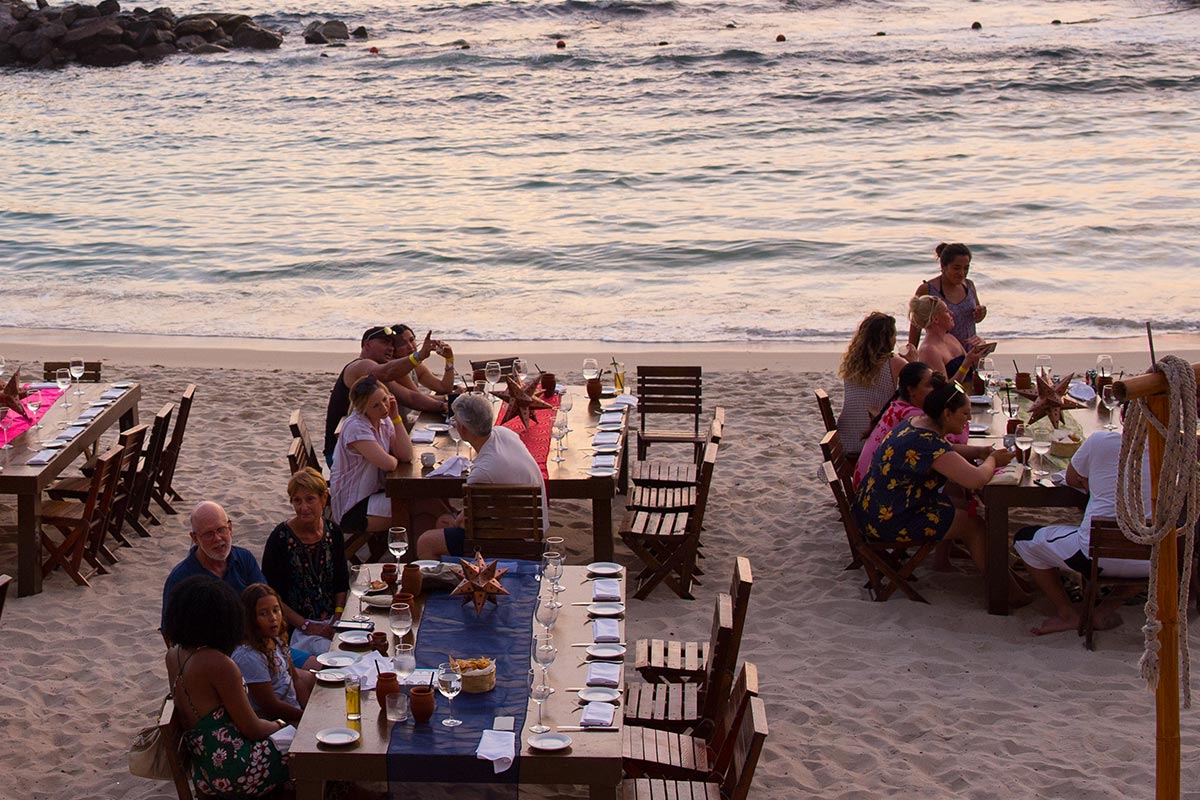 This Thanksgiving holiday, Garza Blanca Preserve Resort & Spa in Puerto Vallarta invites you to take part in our American Thanksgiving celebration with an incredible turkey feast on the beach and a special transmission of NFL football as the New Orleans Saints play the Atlanta Falcons.

We will have a very special Thanksgiving buffet, so bring your appetite and come to cheer on your favorite football team. There will be turkey, and of course, pumpkin pie as well as a great matchup between these two teams.

The Saints-Falcons games are always very exciting since they are between two of the league’s top teams. In the past eight matchups, six were decided by 10 points or less. A busy scoreboard is to be expected that will provide excellent entertainment during your Thanksgiving day feast.

In the US, Thanksgiving celebrations occur on the fourth Thursday of November and in Canada it is celebrated on the second Monday of October. This holiday began to give thanks for the harvest and other blessings of the preceding year.

Thanksgiving started historically as a religious tradition, but it has been celebrated as a secular holiday for a long time. For many Americans, a traditional Thanksgiving meal would not be complete without a turkey, but Thanksgiving NFL Football has played a very important part in the tradition as well dating back to 1934 when the first Thanksgiving day football game was played between the Detroit Lions and the Chicago Bears at the University of Detroit Stadium.

This year the Thanksgiving day football line up will be happening on Central Time according to the following schedule:

Turkey and Football on the Beach!

In order to continue this well-established tradition of feasting and football this November 28th, Garza Blanca Preserve Resort and Spa will be hosting a buffet on the beach with special NFL Transmission.

The three chefs preparing this delicious Thanksgiving feast are the chefs in charge of each kitchen: Chef Eder Gutierrez from Aquazul, Chef Antonio Martínez from Blanca Blue and Chef Álvaro Cortés from Bocados Stk. Each chef will be preparing a turkey according to their style.

The buffet will feature special decorations including pumpkins and horns of plenty. Each guest will receive a welcome drink.

History of the American Tradition

The Mayflower Pilgrims were a group of 102 passengers who sailed to the New World from Plymouth, England on a small ship called the Mayflower. They left in search of prosperity and the promise of land ownership. The journey was arduous and it took more than three months for them to reach Massachusetts Bay, where they established a village at Plymouth. It is the oldest municipality in New England and one of the oldest in the United States.

Many of the Pilgrims stayed on board the ship during their first brutal winter in New England and they suffered from exposure, scurvy and contagious disease. By spring, only half of the Mayflower’s original passengers and crew remained. The surviving settlers moved ashore in March and they were visited by a few Indians who helped them forge an alliance with the Wampanoag, a local tribe.

In November 1621, the Pilgrims and the Wampanoag Indians gathered for an autumn harvest celebration after their first successful corn harvest. The celebrations lasted for three days.

Thanksgiving continued to be celebrated by individual colonies and states and was celebrated nationally on and off starting in 1789 with a proclamation by President George Washington. Finally in 1863, President Abraham Lincoln proclaimed a national Thanksgiving Day to be held on the last Thursday of November.

Sarah Josepha Hale, sometimes referred to as the “mother” or “godmother” of Thanksgiving, is thought to be an influential person responsible for Thanksgiving becoming a national holiday since she had been campaigning for that for several years.

The reason for her advocacy was that each New England state celebrated its own holiday at different times between October and January. She wrote letters to five Presidents requesting their support for a national Thanksgiving holiday. It is thought that the letter she wrote to Lincoln finally convinced him to support legislation to establish Thanksgiving as a national holiday. The new national holiday was intended to be a unifying day to relieve stress during the American Civil War.

In 1939, during the Great Depression, President Franklin D. Roosevelt declared that Thanksgiving would be celebrated on the fourth (next-to-last) Thursday of November instead of the last, fifth one.

This change of date was intended to extend the Christmas shopping season and help to bring the country out of depression. Since December 1941, Thanksgiving has been held on the fourth Thursday in November and this date is now fixed.

History of the Canadian Tradition

The origins of Thanksgiving Day in Canada differ from the American version of the holiday.

The first Thanksgiving by Europeans in North America was held back in 1578 by English explorer Martin Frobisher and his crew in what is now Nunavut, Canada. They ate a meal of salt beef, biscuits and mushy peas to celebrate their safe passage through the New World after facing many obstacles.

On November 6, 1879, Canadian Thanksgiving was officially declared a national holiday. The celebration featured North American turkey, squash and pumpkin. In 1957, Thanksgiving was proclaimed an annual event to occur on the second Monday of October. All the provinces and territories except Prince Edward Island, New Brunswick, and Nova Scotia observe this day as an official statutory holiday.

While both the American and Canadian Thanksgiving traditions have diverged from their roots, today Thanksgiving is celebrated as a day for family and friends to get together to enjoy a feast and give thanks for their blessings. For both holidays, turkey is the traditional Thanksgiving fare and while turkeys are more affordable now than they were back in the 1800s, they still remain a symbol of bounty.

Thanksgiving is a time to be thankful and to give thanks for your blessings, your family and loved ones. It is a time for families to enjoy each other’s company, and also cheer on your favorite football team!