A Guide to Puerto Vallarta’s Sculptures – Part One 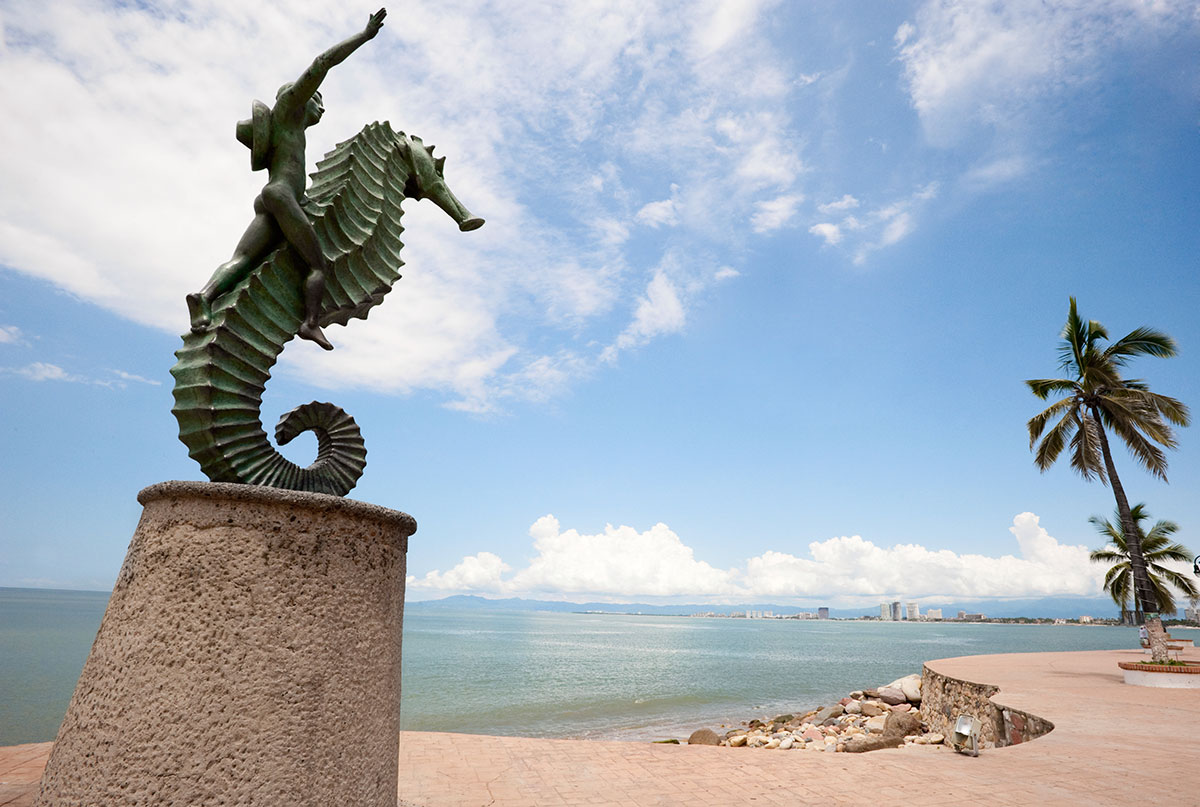 When visiting Puerto Vallarta, it is hard to miss the artistic nature that seems to exude from every inch of the friendly resort town. Spread from one end of the Banderas Bay to the other is a host of swanky art galleries and small shops that feature a range of classical paintings to exquisite handmade crafts, showing off the talent and artistic dedication of Vallarta’s people.

When staying at the Garza Blanca Preserve Resort & Spa, guests are encouraged to visit the Malecón, a beautiful boardwalk that hugs the shore of downtown, where the town’s extreme talent and artistic culture can be seen first hand in a display of sculptures that pepper the mile-long strip. Visitors from all over visit the Malecón and snap photos of the ornate sculptures, but few take the time to learn about their background and the history that makes their presence in Vallarta so important.

For those lucky enough, one can catch the free guided sculpture tour, offered by Gary Thompson, that begins at the Millenia statue beside Hotel Rosita, every Tuesday morning at 9:30am during the peak tourist season. The acute knowledge and interesting facts provided along the tour make it worth the while, but for those who can’t make it, here is a two-part guide that will take you through each of Vallarta’s sculptures, starting on the northern end of the Malecón and heading south toward Rio Cuale.

Adorning the beginning of the Malecón is a magnificent spiral sculpture that encompasses the virility of life, evolution, development and time of the human race.  The Millennia, a large bronze sculpture that marks the dawning of the new millennium, is situated where ships once unloaded their goods, before Puerto Vallarta was the thriving tourist destination that it is now.  Inaugurated on October 31st, 2001, this amazing work of art symbolizes the passage of time with a series of individuals reaching out to the future. 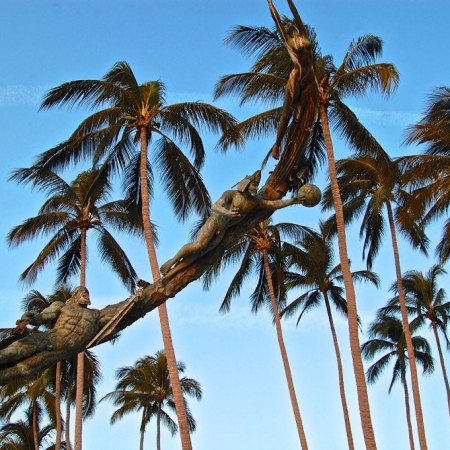 Beginning at its base, one can see the life giving waves that erupt from the sea. Following the spiral up, a strand of DNA and various creatures represent the process of evolution and the presence of Christ that have influenced history. The Charlemagne warrior, once the ruler of the Franks in the eighth and ninth centuries guards the first part of the sculpture. Engulfed in flames, he emphasizes the violence that marked those 1,000 years. Continuing up the spiral, one will see Nezahulcóyotl, a poet king who symbolized the wisdom of the 15th Century with the two items he held in his hands, an atomic bomb and the moon. These symbols represent not only two of the most significant discoveries of the time, but two of the events that also brought about destruction like never before.

The third, and last, millennium is represented by a woman reaching out to a dove, a symbol of the peace that has eluded mankind. This wish for the future is situated atop a round base that was designed to honor the Mesoamerican city of Teuchitlan, Jalisco, home of the impressive round pyramids. 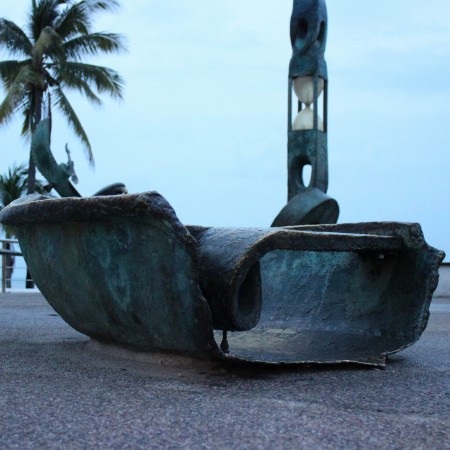 As a relatively recent addition to the sculptures on the Malecón, Origin and Destination brings a unique vision to the concept of time. This multi-piece work of art originally included eight distinct pieces, but only five have been placed on the Malecón in Puerto Vallarta.

There is a boat, which characterizes mankind’s desire to reach new horizons, a chimera, which symbolizes how society slowly replaced animals with machines in the workforce, a wheel , representative of humanity’s advancement in technology and science, a whale that symbolizes the seas of technological development humans are about to embark upon, and finally an obelisk, marking humanity’s spirituality. 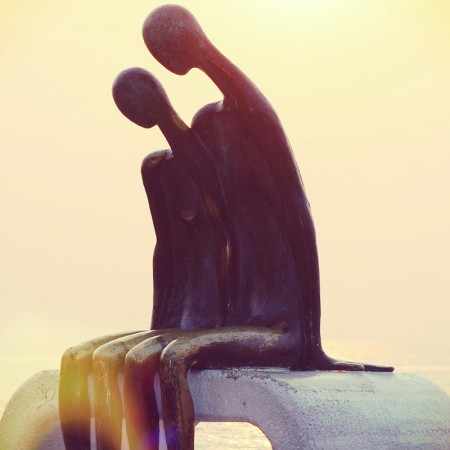 Sculptor Ramiz Barquet proves that his love will surpass the test of time with this romantic sculpture of a man and a woman, sitting side by side as they gaze into town, much like he and his wife used to do. After trial and error, the two found everlasting love on the streets of this magical town.

Mimicking the effect that Puerto Vallarta has on those who visit the seaside town, Nostalgia is a tender reminder to embrace the beauty that surrounds you, both in and out of your loving relationships. 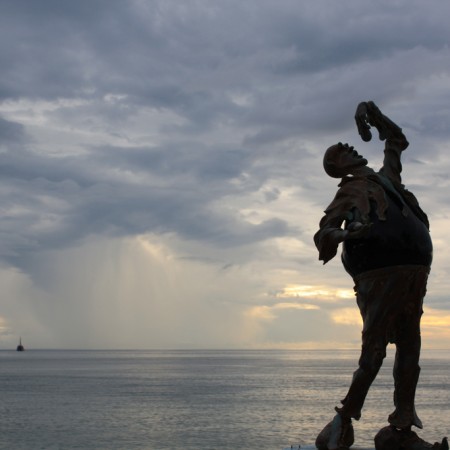 This controversial piece, standing at 7.5 feet tall, has many pondering either their love or rejection for Gutierrez’s work.  The clown-like figure, featuring a variety of jagged edges, appears to be eating stones, symbolic of the way in which we as humans often digest the negativity that surrounds us.  The combination of rock and metal stand out from the Malecón’s other sculptures in a unique, yet mysterious way. 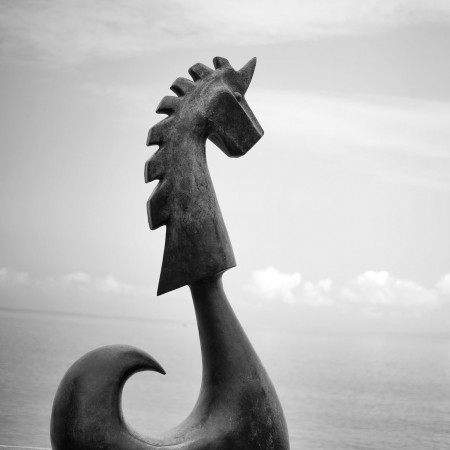 Standing at almost 10 feet tall and 4 feet wide, the Good Fortune Unicorn is a daily reminder of the luck that comes to those who live in this great city.

According to ancient legend, anyone in the possession of a unicorn will find good fortune, and the people of Puerto Vallarta have done just that with the unveiling of Riebeling’s statue in January of 2011.
Look out for next month’s newsletter to continue your artistic journey with A Guide to Puerto Vallarta’s Sculptures Part 2.