“We have added an even greater variety of flavors, building on our previous menu,” shares Chef Carlos Leyva “responding to the comments and preferences of our clients as well as reflecting the latests trends in fine Japanese cuisine.”

The launch of the new menu at Hiroshi comes hand in hand with the hotel’s gourmet culinary festival, Omakase, which runs throughout the month of June welcoming four star chefs from some of the best sushi restaurants in the United States to serve a tailored menu for guests dining at the restaurant on Thursday, Friday and Saturday nights in June. The Omakase festival takes its name from the celebrated concept in Japanese restaurants whereby diners leave their meal up to the chef’s recommendations, dining the freshest produce of the day. To honor this tradition, the new menu at Hiroshi will now feature this option to order Omakase throughout the year, which includes a 5 course dinner according to the chef’s recommendations. 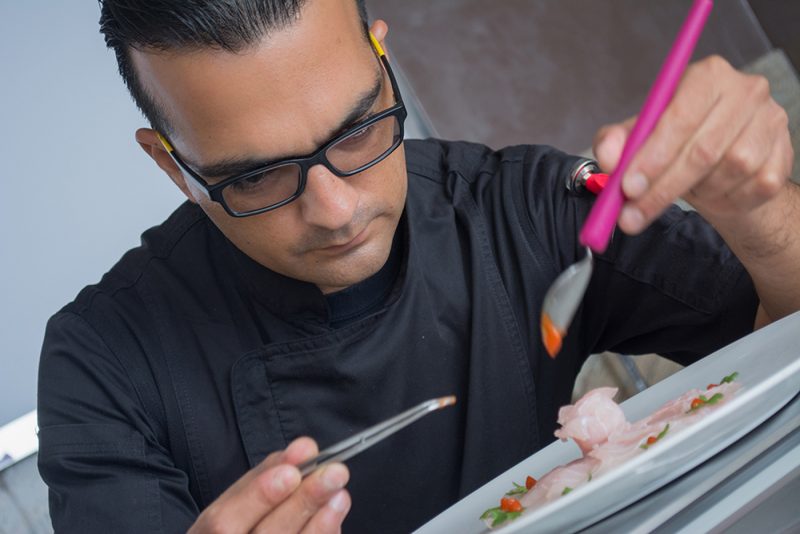 Some of the new dishes that now feature on the Hiroshi menu include a number of additional sushi rolls and more options for vegetarians such as the Veggie Maki with cucumber, avocado, beet, carrot and cilantro and the Yasai with creamy tofu, coriander, carrot, mango and avocado.

For the sashimis, there is a greater selection of fresh fish and meat including scallops, hamachi, tuna, salmon, toro as well as the catch of the day. What distinguishes the new menu is the variation of the sauces that accompany the fresh selection.

As before, the Signature Dishes are perhaps the first place you should look on the Hiroshi menu, with options such as the Aji Kobe medallions in aji panca amarillito sauce or the Shiitake Salmon with risotto. One of the highlights of Hiroshi’s Signature Dishes

is the Crispy Wrap, which is a shrimp and chicken involtini with bonito broth.

Whilerefreshing the menu at Hiroshi, Chef Leyva was careful to keep those dishes that everyone loves, like the Edamame, Seafood and Vegetable Dumplings, Miso Soup, the Mexican Roll and a wide range of Nigiris. Now you will be able to enjoy all those Japanese delicacies that you love as well as some new additions to tempt your palate.