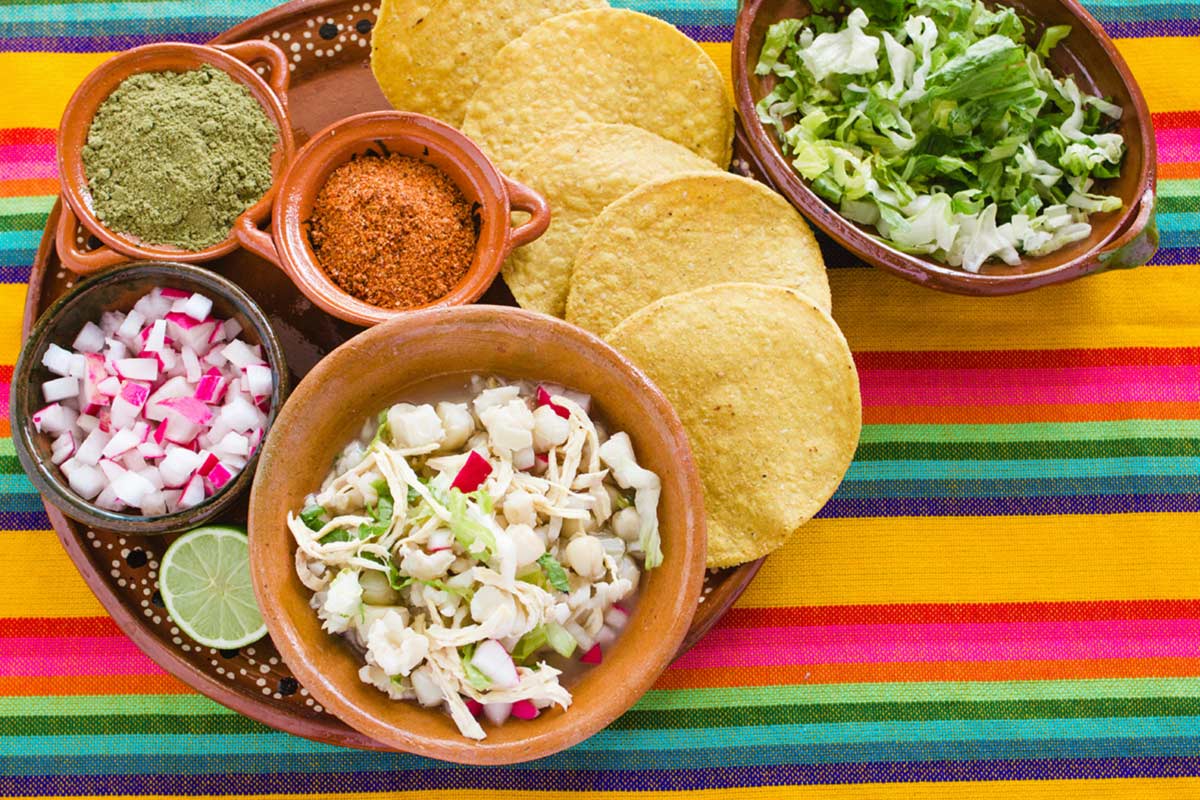 Pozole is one of the most popular dishes among Mexicans. This article will teach you everything you need to know about this traditional Mexican soup. Not only will you learn about the history of pozole as if you were an expert, but you will learn how to prepare it like any Mexican abuelita (grandma). Let’s get started!

A Short Story about Pozole

Pozole is one of the emblematic dishes of Mexican gastronomy, and is a favorite among locals. There is never a time where pozole wouldn’t be a good meal. Traditionally, it is eaten on special occasions like weddings, celebrations, holidays and during winter; there’s nothing else that compares to this heavy, thick, hearty and filling soup, but what is pozole?

Today, there are different types of pozole: green, white and red – just like the Mexican flag. One can add pork, chicken or just veggies; it is served with cabbage, onion, lime, oregano, radishes, sour cream, and tostadas. Can you almost taste it?

Pozole rojo is consumed in Mexico City, Sinaloa, Nayarit, and Jalisco; it is made from chiles rojos and guajillos, giving it the bright red color that distinguishes this soup. This pozole includes pork and pork feet and can be topped with cabbage, radishes, and chicharron (pork rinds).

Pozole verde is made of poblano peppers, tomatillo and jalapeños; it is usually cooked with chicken instead of pork and the recipe includes pumpkin seeds.

Pozole blanco is the least spicy; it gets its flavor from oregano, garlic, onion and the chicken you put inside the pot.

But, where did pozole come from and why is this dish so tasty? Pozole has very unique origins that are linked to Mexican heritage. The word pozole comes from the Nahuatl word “pozolli” which means “hominy”, describing perfectly the cooking process – hominy is dried corn that has been soaked in a mineral bath to make it double in size – and that is the reason why the dish got its name.

This is an ancient meal prepared by the Aztecs during pre-Hispanic times. According to, The General History of the Things of New Spain, it was a sacred dish consumed only by priests and emperors, featuring the meat of human sacrifice victims. This ceremonial dish represented the duality of life and death, since it included human meat from the sacrifices; it was supposed to create a direct connection with the gods.

There is another version of pozole’s history that says that tepezcuintle meat was used; tepezcuintle is a lowland rodent found in Central and South America – nobody eats them anymore.

After the Spaniards arrived, the pozole recipe changed to include other European ingredients like chicken, pork, and spices. This created the fundamentals of how we know Mexican cuisine nowadays: a complex and ancient cuisine with symbolism and a strong social relationship with the country’s culture, which is one of the reasons it was named an Intangible Cultural Heritage of Humanity by UNESCO.

Now that you know the history of pozole, keep reading to discover how to make it at home.

This recipe is perfect for six to eight servings. Also, you will have to be very patient because it will take you around 3 hours to finish the whole process, let’s start!

If it is your first time making pozole, the best thing you can do is to prepare your area by putting all the ingredients very close by; we call this mise en place. Now, let’s start with these steps, that are done in separate pots at the same time:

Prepare the Chili Base

Put All the Pieces Together

Now, it’s time to put everything together!

When the pozole is ready to serve, it will have a bright red color.

Time to Prepare your Garnishes

While your pozole is simmering, get the garnishes ready. The traditional garnishes are: cabbage or lettuce, white onion, slices of radish, oregano, limes, and some chopped dried chiles. Also, get some tostadas, if you can’t find any, you can make them too:

We all know that pozole can be very hard and time consuming to prepare, but it’s definitely worth waiting for the delicious combination of spices, chili, and broth. Next time you visit Mexico, remember to add this traditional dish to your bucket list and let us know what you think.

The Top 10 Cheap or Free Activities in Cancun