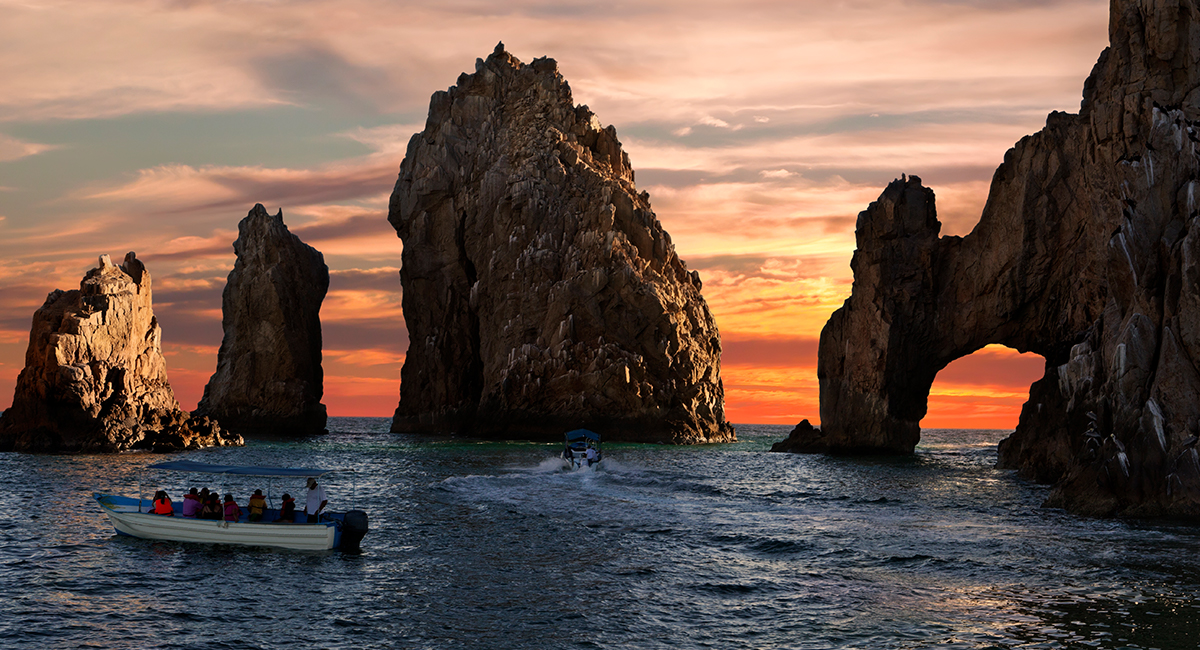 It’s a new year, and it’s time to start planning your next vacation. If international travel is on your list of New Year’s resolutions, you’ve got to consider Los Cabos, Mexico.

Los Cabos has absolutely everything you want in your Mexican vacation. From beaches to water sports to nightlife and culture, read on to learn why Los Cabos is one of the best places to visit in 2020.

Nestled along the southern tip of the Baja California Peninsula lie the twin cities of Cabo San Lucas and San Jose del Cabo. Together, they make up the area known as “Los Cabos,” which is a world famous vacation destination that hosts over two million visitors each year. Warm, dry weather year round, stunning scenery, and tourist friendly infrastructure make Los Cabos one of the leading destinations in Latin America.

The impressive desert landscape is one of the best reasons to visit Los Cabos. Mountains surround the cities, and rocky outcroppings and stretches of sand meander through the municipalities.

The weather in Los Cabos is warm, dry and sunny most of the year, which makes it the ideal vacation destination. August is the hottest month with high temperatures around 90 °F, and January is the coldest month with low temps around 60 °F. September is the rainiest month in the desert, with an average of just 3-4 inches of rain throughout the area. Summer thunderstorms usually do not get close enough to bring rain into Cabo San Lucas or San Jose del Cabo. You will almost never need to worry about your travel plans getting rained out.

Each of the two cities has its own draw, and its own personality. A sandy strip of highway known as “the corridor” connects the towns.

Cabo San Lucas is perhaps the better known city, having been rated one of the top destinations in Mexico ever since the Mexican government started to develop the area for tourism in earnest in 1974. Famous for its beaches, restaurants, and nightlife, Cabo San Lucas has everything you’d expect in a Mexican beach destination, with noticeably more luxury than other cities.

One of the things that makes Cabo San Lucas such a fantastic place to visit is its beaches. Savvy international travelers will know that all beaches in Mexico are public, so grab your towel and stretch out anywhere you like. Medano Beach is easily accessible from downtown, and has many beach club style restaurants along its two mile stretch of golden sand, where you can relax on a lounger under an umbrella while enjoying fresh seafood and a cold cocktail. You can also find parasailing, jet skiing and other water sports on Medano Beach.

Lovers’ Beach and Divorce Beach are two famous, connected beaches at Land’s End, the southernmost point of the Baja California Peninsula. The two beaches straddle giant rock formations including the famous El Arco (The Arch) that mark the spot where the Pacific Ocean and the Sea of Cortez meet. To get to Lovers’ Beach and Divorce Beach, grab a water taxi at the marina and take advantage of the boat ride to see El Arco from the water. This granite formation is three stories high with a natural arch and was made by erosion. You can often find sea lions and other wildlife there, as well. Swimming and snorkeling are allowed at Lovers’ Beach because it is on the Sea of Cortez side with calmer water. Divorce Beach is on the rougher Pacific Ocean side and the water is not fit for swimming.

Cabo San Lucas and the entire Los Cabos area are home to many world class chefs heading up restaurants at resorts and independent locations downtown and along the corridor. Fresh seafood, traditional Mexican cuisine, and Mexican fusion just some of the fare you will find. Foodies will be in heaven with hundreds of high end dining establishments to choose from. Some well-known restaurants in the downtown area include Edith’s, Hacienda Cocina y Cantina, and Sunset da Mona Lisa.

There is no shortage of fun to be had in the evening hours in Cabo San Lucas. Nightlife is one of the things that Cabo is famous for. You can find everything from microbreweries to dance clubs playing electronic music and top 40, to the Cabo Wabo Cantina, owned by Sammy Hagar of Van Halen and named after the band’s hit song “Cabo Wabo.”

Cabo San Lucas is known for its abundant marine wildlife. A sailing, fishing, or whale watching tour is a great way to enjoy a day on the water. Depending on the time of year, you can see whales, dolphins, whale sharks and rays. In the winter months, pods of whales come all the way from Alaska and Siberia to bear their calves in the warm waters of the Sea of Cortez. Whale sharks frequent the area as well in the winter through early spring. You can take a boat tour to swim with the whale sharks, which are a docile, plant eating species of shark, and also the largest fish species on earth. Sport fishing is popular, with game such as dorado, and striped marlin. Most tours leave from the Cabo San Lucas marina. Every year in October, Los Cabos hosts the highest paying marlin tournament in the world, Bisbee’s Los Cabos Offshore.

Los Cabos has great snorkeling and scuba diving. The Sea of Cortez has been called the “Aquarium of the World” because of the abundance and diversity of marine life that live there. Snorkelers and scuba divers can expect to see everything from seahorses to stingrays to moray eels to octopuses, large schools of tropical fish, and even hammerhead sharks and sea turtles. Scuba divers can see a unique feature off the coast of Pelican Rock called the Sand Falls, which is a sand waterfall caused by rock formations about 50 feet deep in the water. Take a snorkeling or scuba tour with an experienced guide to maximize wildlife sightings.

San Jose del Cabo is just 30 minutes’ drive down the highway from Cabo San Lucas, but it has a completely different vibe. The town is more artsy, and still has its Spanish colonial history. Art lovers, history buffs and photographers will appreciate a walk through the old city center, which is charming, with cobblestone streets and adobe houses. It retains much of its original architecture, because city planners have restricted growth to outside of the historic center.

The Mission San Jose del Cabo, the main church in the old center, was built by Spanish Jesuit missionaries in the year 1730, and is the best example of Spanish colonial architecture that you can find in the city. A tile mosaic tells the story of founder Nicolás Tamaral, who was killed by the local indigenous Pericu people, echoing the stories of many conflicts between the indigenous people and the Spanish settlers throughout Mexico during that time period. The church was also the main site of the Battle of San Jose del Cabo, which was part of Mexican–American War, in November of 1847. You can find a monument of Lieutenant Antonio Mijares, who defended the city against the attack, on the main street of the town that bears his name.

Near the church you will find the dry riverbed of the San Jose River. This previously above ground river now flows underground and empties into the Sea of Cortez at the estuary just south of the city center. Bird watchers will love the estuary, as it is home to numerous species of birds, including ospreys, kingfishers, warblers, blue herons, caracaras, and many others, in addition to many butterflies and dragonflies. The estuary is the largest freshwater oasis in the region, and also the largest estuary in this part of the Americas. In the summertime you can spot sea lions sunning themselves. The best part about the estuary is it is free and open to the public. There is a walking path that takes about 20 minutes to walk. You can hire a guide for a tour, and you can also go kayaking on the water. The estuary is closed to vehicles and horses, because it is a protected site.

There are still some large houses in the city center that were built in the 1800s. Most of them have been converted into restaurants, art galleries and shops. You can buy silver, local gemstones and jewelry, and locally made art and crafts. The city has a well-developed art scene. You can find paintings, sculptures and much more by traditional Mexican artisans, as well as high end artworks by Mexican contemporary and international artists. There aren’t any large shopping malls and chain stores in San Jose del Cabo, as the city and its residents prefer to support the art galleries and local shops. These shops stay open late at night during the high season between October and May, and there is an art walk every Thursday evening from 5-9 pm from November to June.

When booking your trip to Los Cabos, it’s a good idea to look for a resort located in the corridor between Cabo San Lucas and San Jose del Cabo, so you can be close to both destinations. The brand new Garza Blanca Resort & Spa Los Cabos is a luxury all inclusive resort situated exactly in between both cities, and right on the beach. The resort is a great choice for your accommodations this year when you visit Los Cabos, and the concierge can book all of your tours and excursions for you.