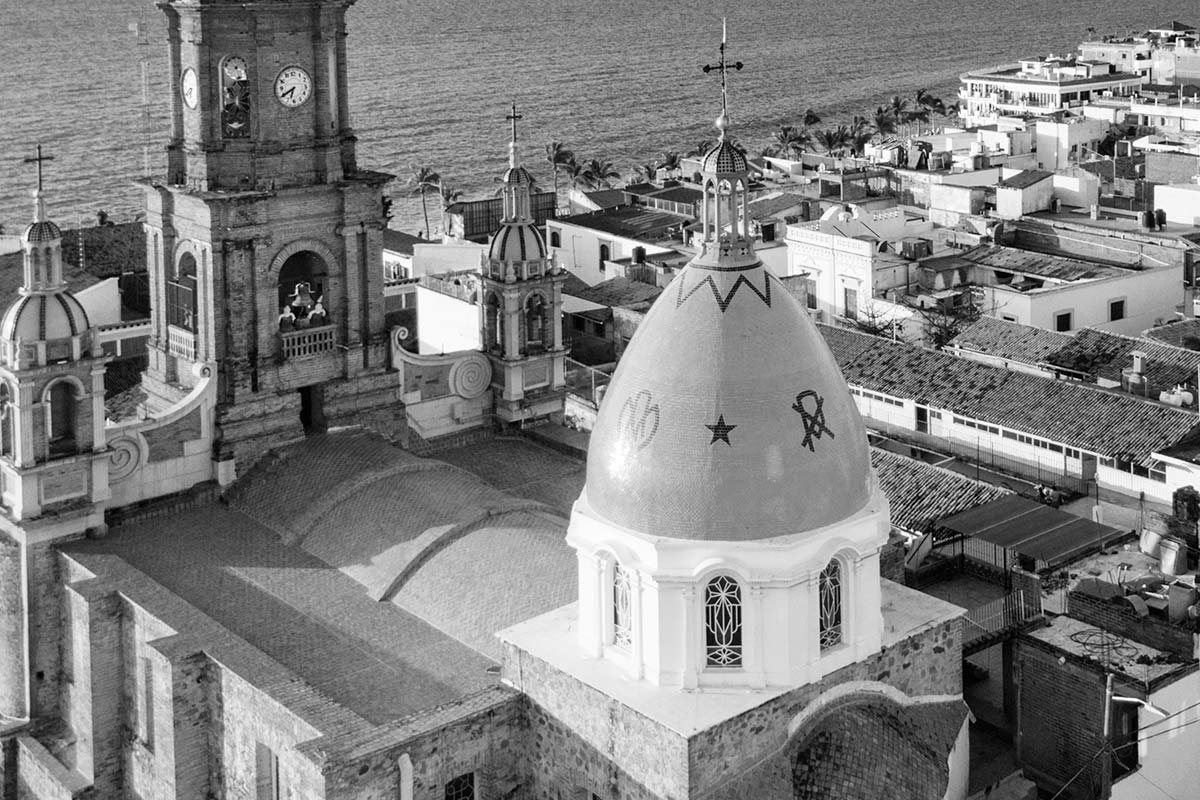 Puerto Vallarta was not always the bustling vacation destination it is now, in fact, the Vallarta that we know today is relatively new. Puerto Vallarta’s history starts with indigenous people called the Aztatlan, who were living in the Ameca River Valley region (now known as Nuevo Vallarta) when the Spanish arrived in the 1500s. Spaniards coined the name Bahía de Banderas, which means Bay of Flags, as a reference to the colorful flags carried into battle by the indigenous population.

Between the 1500s and 1800s, sailors, explorers, and pirates used the Banderas Bay as a stop on long sea voyages or a place to rest and hide out, but the area wasn’t officially founded until the mid-1800s.

In the early 1800s, there was only a small fishing village where Puerto Vallarta is now. The larger cities of the area were the silver mining towns of Cuale, San Sebastián del Oeste, Talpa de Allende and Mascota in the Sierra Madre mountains above Puerto Vallarta. At that time, Mascota was the second largest city in the state of Jalisco, after Guadalajara.

Later that century, as mining activities around Mascota increased, the Vallarta area became a small port and base camp where supplies were delivered by sea and then transported up to the mining towns by donkey. The area was called Las Peñas de Santa María de Guadalupe at that time, or Las Peñas for short.

Historical accounts of the official founding of the area conflict with each other, but the “official” story says that Don Guadalupe Sánchez Torres founded the area in 1851 with his family and friends. He had been delivering salt by boat to the area, since the mines required salt to refine silver. The salt was loaded on donkeys and carried up the mountains to the mines.

Legend says that in 1851, Don Guadalupe decided to bring his family to Las Peñas de Santa María de Guadalupe to attend the feast of Our Lady of Guadalupe on the morning of December 12.

The year 1851 is featured on the iconic crown of the main church in Puerto Vallarta today, commemorating the founding date.

By the mid 1800s, Las Peñas de Santa María de Guadalupe had become a vacation destination for residents of the Sierra Madre towns, and had returning vacationers, as well as families starting to settle, either bringing salt or becoming farmers or ranchers.

There is a record of the Union en Cuale Mining Company purchasing land from Los Arcos to the Pitillal River in 1859 to support its operations in the Sierras above.

The combination of the Union en Cuale’s operations and families leaving the Sierras to settle at lower elevation developed Las Peñas into a self-sustaining village in the 1860s.

In 1885, the port of Las Peñas was opened to national maritime traffic, which increased the number of people coming to the area.

The Municipality of Puerto Vallarta is Established

The Mexican Revolution raged through the country from 1910 to 1920, and in the middle of all of that conflict, in 1918, Las Peñas was elevated to a municipality and the name was changed to Puerto Vallarta in honor of Lic. Ignacio L. Vallarta, who was a well-known lawyer and former governor of the state of Jalisco.

During his governorship from 1871 to 1876, Governor Ignacio Vallarta was responsible for rebuilding the Government Palace, passing the Public Education Law of 1874, and finishing work on the Jalisco state penitentiary.

Between 1859 and 1921, the Union en Cuale Mining company still owned most of the land between Los Arcos and the Pitillal River, making it impossible for residents to develop the area the way they wanted to. In 1921, the citizens of Puerto Vallarta petitioned the government for a land grant based on Mexico’s new, post-revolution constitutional law which included land and mineral rights.

In 1921, 36 square miles of land was expropriated from the Union en Cuale Mining Company and an ejido (a farming cooperative administered by the government) was created.

It is this ejido land status that actually stunted Puerto Vallarta’s growth all the way into the 1960s and 70s because ejido land could not be sold, subdivided or leased until the laws changed again in the 70s. Developers did not want to build on land for which they could not obtain a title.

Between 1925 and 1935, an agriculture company from the United States called Montgomery Fruit Company created banana plantations in the valley around the area that is now the neighborhood of Ixtapa, outside of the Puerto Vallarta city center. This created work for locals, and the town grew. Other products grown in the area included corn, beans, tobacco and coconuts. The Montgomery Fruit Company had to leave the country when post-revolution agrarian laws went into effect.

The 1950s – Puerto Vallarta in Photographs

In the 1950s, Puerto Vallarta was a village of approximately 2,000 people. It was quaint, with cobblestone streets and buildings with tiled roofs throughout the city center.

Donkeys carrying people, fruit, water, and supplies shared the streets with a few cars. At that time, you could still see wooden carts with wooden wheels drawn by donkeys in the streets of downtown.

Small fishing boats pulled up to the beaches to unload the day’s catch. Fishermen, sometimes barefoot, could be seen walking through the town square with a dozen red snapper hanging from an oar or wooden pole. Women could be seen washing clothes in the river and carrying jugs of water on their heads through town.

People walked along the small concrete boardwalk, but the Malecon as we know it today did not exist. The historic lighthouse still stands in the same spot on the Malecon today.

The Parish of Our Lady of Guadalupe had its tower completed in 1952, but it did not yet have its crown. The iconic crown was finally placed on top in 1965, and the two lateral towers were completed in 1987.

Imagining this idyllic scene just got easier with these historical photographs.

In the early 1950s there were no major air routes directly into Puerto Vallarta, and no overland road either. The only ways into Vallarta were by sea or by air. Small 20 to 30 passenger Douglas DC3 aircraft – hopper planes from Guadalajara or Mexico City – landed on Puerto Vallarta’s tiny airstrip.

Several major airlines began flying hopper planes into Puerto Vallarta from Guadalajara or Mexico City in the mid-1950s. PV still did not have an international airport, but its tiny airstrip allowed visitors from within Mexico and from abroad to visit the destination.

However, the most significant event in Puerto Vallarta’s modern history was still brewing. In the early 1960s, two men met in Los Angeles and hatched a plan that would change the history of the quaint fishing village forever: Guillermo Wulff, an engineer from Mexico City, and American film director John Huston.

Huston was looking for a place to film the adaptation of Tennessee Williams’ The Night of the Iguana, which had been a short story and then a Broadway play.

“In Los Angeles I met an architect and businessman from Puerto Vallarta named Guillermo Wulff […] I was thinking about the location for La Iguana, and Guillermo urged me to go to Mismaloya,” Huston recalled in his 1980 memoir.

Guillermo Wulff had been building homes in Puerto Vallarta, in the Gringo Gulch neighborhood. You can still see the plaques on the homes today, bearing his name. He introduced the dome as an architectural element in several houses that he built. He obtained a 90-year contract from the government to build in Mismaloya, and that was the key to Night of the Iguana taking place in Mismaloya.

“Although Mismaloya was indigenous land, Wulff said he had a contract there and could build whatever he wanted there,” Huston recalled.

The film production set up shop on Mismaloya beach in 1963 and began building the hotel as the set for the movie. Once the set was built and the lights were up, the movie stars arrived including Richard Burton, Ava Gardner, Deborah Kerr and Sue Lyon.

Richard Burton brought his then mistress but soon-to-be-wife, Elizabeth Taylor, to the location set, which caused Hollywood gossipers to go nuts as both Taylor and Burton were still married to other people during the filming. Paparazzi arrived in Puerto Vallarta to capture the extra-marital, on-set affair, which made headlines around the world. Burton purchased Casa Kimberly for Taylor, the famous property in Puerto Vallarta’s Gringo Gulch neighborhood with the Puente del Amor (Bridge of Love) between the two houses.

Today with over 200,000 residents, Puerto Vallarta is the second largest metropolitan area in the state of Jalisco, after Guadalajara. The city celebrated its 50th anniversary as a city in 2018, which was also its 100th anniversary of the municipality.