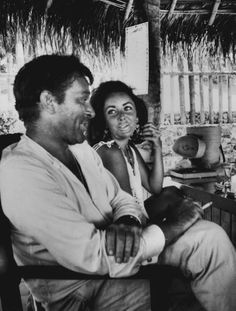 There are few love stories that have captured the world’s attention and interest the way that Richard Burton and Elizabeth Taylor’s love story did. Their passionate and zealous, yet often turbulent relationship, took the world by storm in the 1960s and became one of the most publicized love stories in history. Despite the continuous arguments and the explosive drama, the couple shared a deep and fierce love deemed as beautiful by many.

Richard Burton and Elizabeth Taylor met in the early ’60s on the film set of “Cleopatra” where they were co-stars. Burton and Taylor had an instant connection and attraction to one another and although married to other people (she to Eddie Fisher, he to Sybil Williams), they couldn’t contain their feelings and started an extravagant and scandalous love affair.

Filming the Night of the Iguana

In 1963, a few years after the film “Cleopatra” was released, John Huston, a famous American film director, arrived in the beautiful and alluring town of Puerto Vallarta, ready to direct his new movie “The Night of The Iguana“. Back in 1963, Puerto Vallarta was a small fisherman’s town, nowhere near the size it has grown to today, and he was impressed by its pure tropical beauty and blissful essence. “The Night of the Iguana” was filmed on the southern side of Mismaloya on a hill/peninsula, offering a picturesque view of both Banderas Bay and the quaint enchanting islands of Los Arcos. “The Night of the Iguana” was filmed close to Garza Blanca Preserve Resort & Spa and although it’s no longer possible to go inside the grounds, it can be seen and admired from a distance.

Huston had cast Burton to play one of the leading roles in his movie. On arrival to Puerto Vallarta, Burton was so bewitched with Puerto Vallarta’s beauty that he asked Taylor to join him while he was filming. It was an oasis for the lovers, offering serenity from the hustle and bustle of Hollywood and away from the eyes of the Paparazzi’s intrusive cameras. Richard Burton and Elizabeth Taylor’s romance blossomed while they were here as they were able to enjoy one another a little more publicly. They were often spotted dining together at El Dorado, which is a popular restaurant located on Los Muertos beach.

During filming, Burton was renting a villa in the downtown area known as ‘Gringo Gulch’, which offered a stunning view of downtown Puerto Vallarta and Banderas Bay. Before Taylor’s arrival, he rented out Huston’s private villa called ‘Casa Kimberly‘ for her, which was conveniently right across the street from the villa he was staying at. Burton ended up purchasing the wonderful nine-bedroom villa for Taylor as her 32nd birthday present. Casa Kimberly is only a 19-minute drive along the idyllic coastline and into downtown Puerto Vallarta from Garza Blanca Resort. You can enjoy dinner at Casa Kimberly’s open-air restaurant, The Iguana, which offers paradisal views of the city of Puerto Vallarta and Banderas Bay. The Iguana serves contemporary Mexican cuisine, with traditional dishes mixed with modern, ambrosial flavors. The price of dining at The Iguana is high but you are sure to have a wonderful dining experience.

Once the purchase was formalized, Burton built a pink bridge called the Lover’s Arch between the two homes so that they wouldn’t have to access the street to see one another. They could conveniently spend time together while still enjoying their own space and peace. Due to their famous and spirited fights, the bridge was also nicknamed the “Reconciliation Bridge”. The bridge still stands in Gringo Gulch between the two homes but is now painted white and it is a popular tourist attraction. Visiting the bridge gives a certain nostalgia, a step back in history to an older, slower time and a reminder of the passionate, fiery love story between two movie stars that took the world by storm. After visiting Lover’s Arch, many tourists like to head down to the Romantic Zone of Puerto Vallarta, where the cobbled passages of the famous Rio Cuale Flea Market, the unique artisan treasures and souvenir stalls, the enchanting walk along Rio Cuale River, and the live Jazz music keep the romance going.

Richard Burton and Elizabeth Taylor spent a lot of time enjoying and relishing in the beauty of Puerto Vallarta long after the filming of “The Night of the Iguana” had finished. They became enchanted with the tropical town, much like many people after them. It is said that the pair put Puerto Vallarta on the tourism map attracting widespread attention. Burton and Taylor did eventually marry each other, twice, but their lively relationship ultimately ended in divorce both times. However, their love and fondness of Puerto Vallarta did not end like their marriages and they both continued vacationing here often. Bring your partner to Garza Blanca Preserve Resort & Spa Puerto Vallarta to experience your own love story!